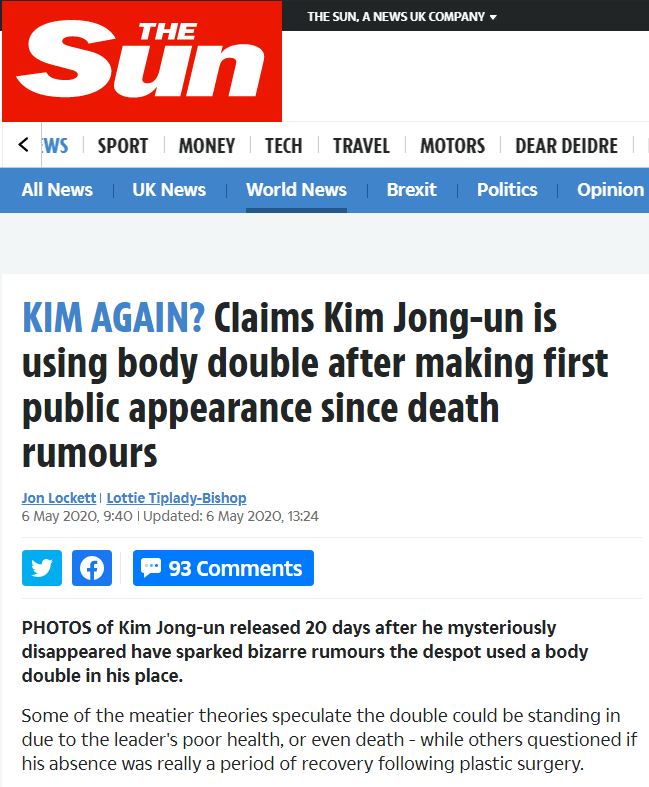 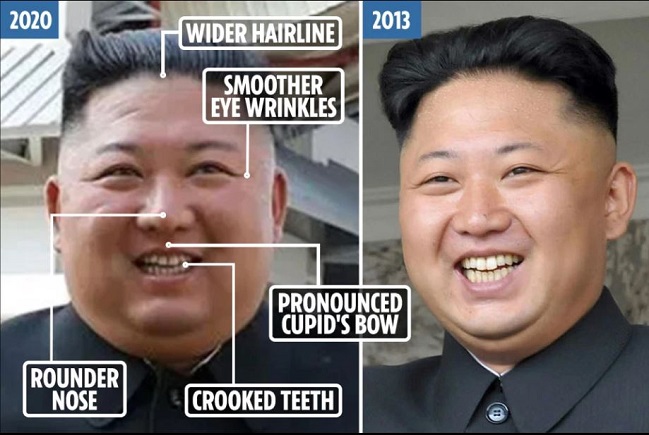 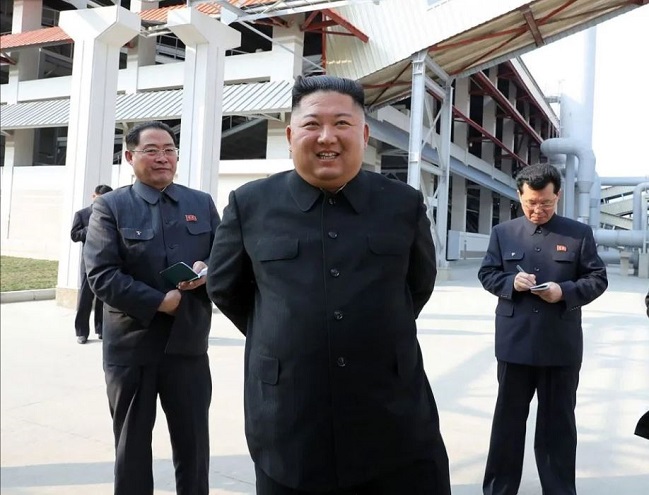 Some believe one of Kim's body doubles may have taken his placeCredit: AFP or licensors AFP OR LICENSORS

at a fertiliser factory  - amid escalating reports he was either dead or fighting for his life.

they point to changes in his face, hair and teeth compared to previous appearances.

But there are suggestions some of the photos have in fact been doctored.

Others suggested the dictator's mysterious 20-day disappearance was down to plastic surgery.

In the most recent snaps, it's suggested his nose is a little rounder

and his cupid's bow more pronounced.

much straighter, and several shades less white than in previous pics.

But others pointed out straighter teeth can easily be achieved with dental work,

and the chain-smoker is bound to succumb to stains on his pearly whites from time-to-time.

Some seized upon his hairline, which appears to be wider in recent pics -

but questioned if this could just be the result of a skilled barber.

There's also a suggestion his ears, once with earlobes that appeared

to be clearly attached to his head, forming a smooth curve, have changed. 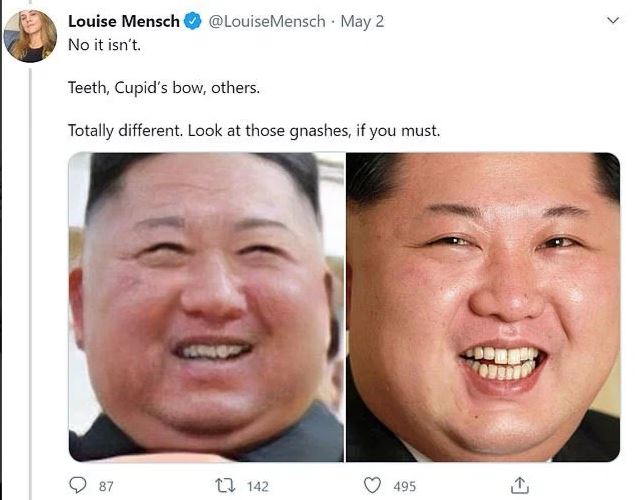 It's been reported the images shared here are doctored 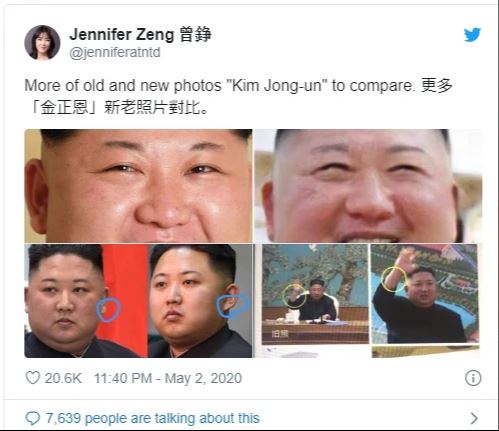 Newer snaps appear to show the leader with much chunkier, hanging lobes.

has been accused of using a stand-in for public events in North Korea.

In 2017, the Sun Online revealed images of the dictator

​chatting with his body doubles at a missile test.

He was filmed with two of his lookalikes - dressed identically in

It's long been reported paranoid Kim often travels with doubles

in a bid to foil assassination attempts.

However, some believe this time a lookalike was used because

Ex-MP Louise Mensch waded in to the debate, tweeting;

"Teeth, Cupid's bow, others. Totally different. Look at those gnashes, if you must."

She added: "It's not the same person. But not going to argue it.

Hairy moment when I thought my information was wrong.

It wasn't wrong though.

"Not sure whether it suits us to go along with it or not, but these two are not the same."

But the Daily Mail reports the photos Ms Mench shared appear to be "crudely" doctored.

And, to add to the mystery, the claims come as the North Korean leader

missed yet another high-profile event.

He was noticeably absent as Russia awarded him a medal

​to mark the 75th anniversary of the victory over Nazi Germany. 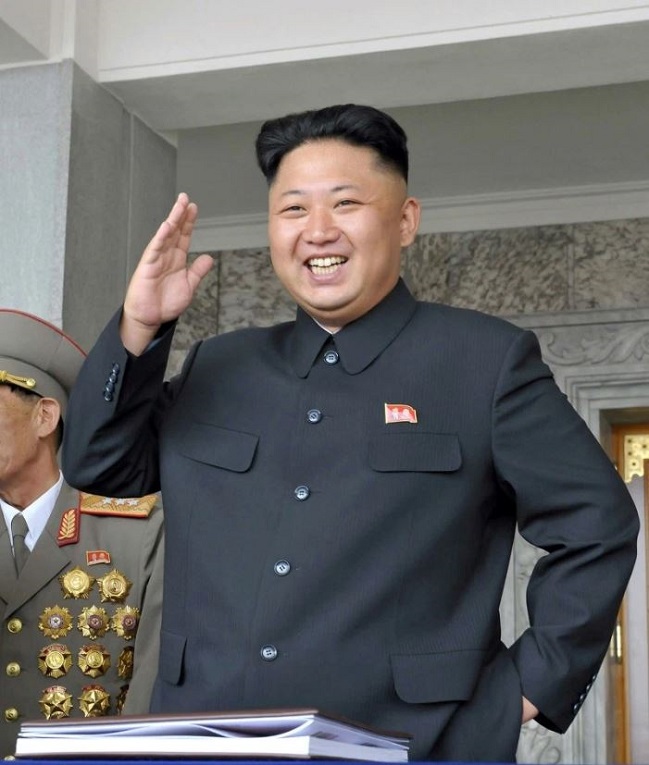 An older snap of Kim from 2013 appears to show him with slightly different teeth and ears,

and heavier lines around his eyesCredit: AFP 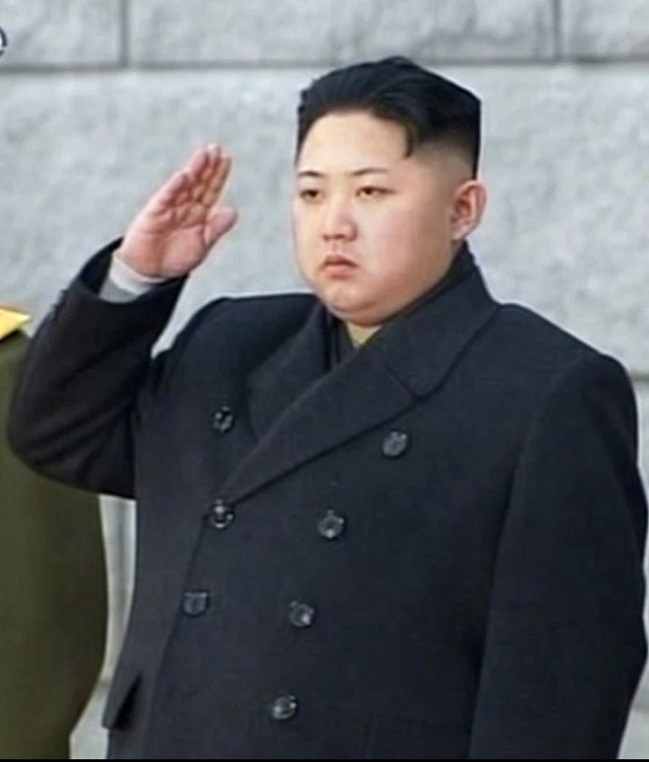 A snap from 2011 illustrates the despot's changing face, but is it down

to his indulgent lifestyle and ageing or something more sinister?Credit: AFP

He appeared alongside his sister Kim Yo-jong, who had been tipped to succeed him, at the fertiliser plant, the pictures claim to show.

Concern over his health began when he failed to appear at an important celebration on April 15, to mark the birthday of Kim Il-sung, his grandfather and the founder of the country. 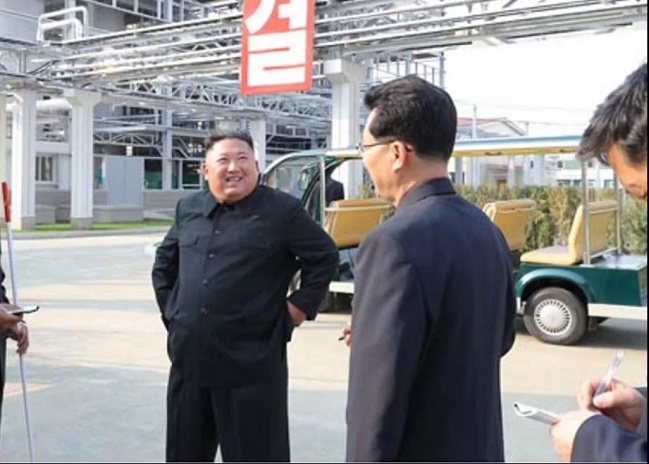 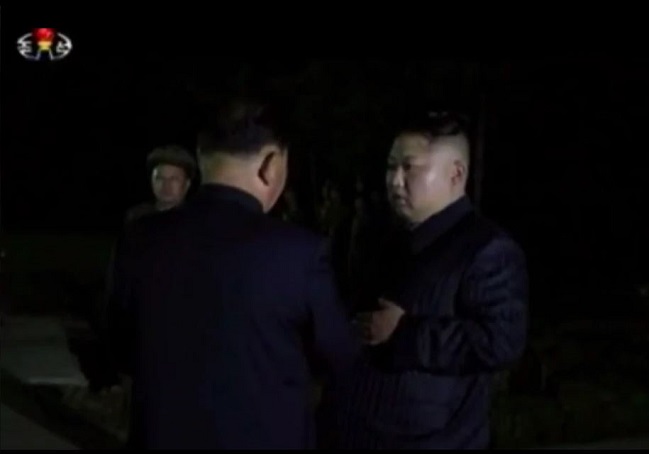 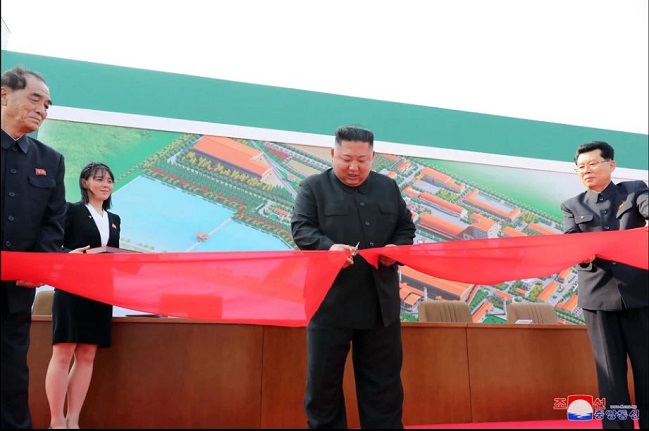